Controller block on DWSIM for Mac

I added a controller block to adjust a molar fraction on a simulation, but it is not working on DWSIM for Mac.

The set-point/offset becomes zero when I press enter and on the open control panel the adjust value is zero.

I'm trying to use the controller block on DWSIM for Mac, but it seems that the method or operation is not implemented. Does anyone know how to implement this operation? Thanks! 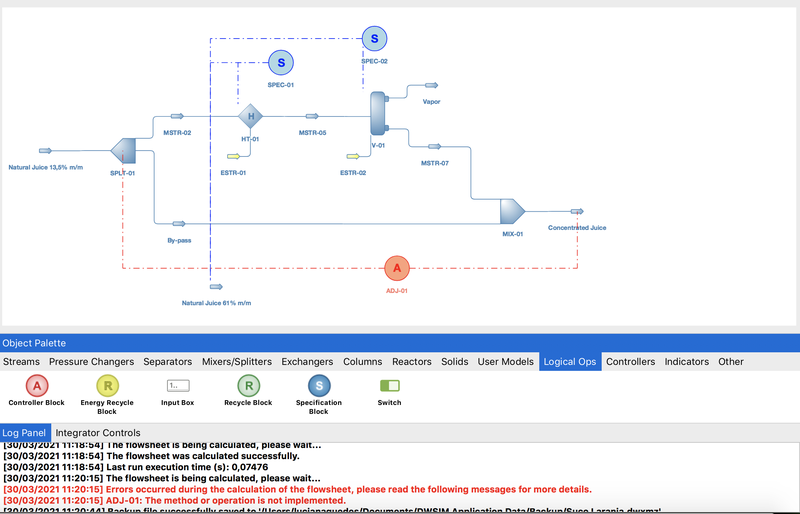 The key difference between the steady-state models and dynamic process models is the ability to take into account variation over time. However, as can be seen below the difference is not simply the addition of a time dimension; dynamic modeling often brings a whole different approach that results in dynamic models being a much truer-to-life representation of the process in many other respects.

Process systems are often most readily specified in terms of a mixed set of integral, partial differential and algebraic equations, or IPDAEs, and this is the chosen representation of most established software designed specifically for process systems engineering. Traditionally, IPDAE systems are reduced into a mixed set of ordinary differential and algebraic equations, or DAEs. While ordinary differential equations (ODEs) typically arise from the conservation of fundamental quantities of nature, algebraic equations (AEs) result from processes where accumulation is not important or transients are considered to occur instantaneously, as well as by introduction of auxiliary relationships among variables. Discontinuities in the governing phenomena of physical, chemical, and biological systems frequently arise from thermodynamic,  prepaidgiftbalance  transport, and flow transitions as well as structural changes in the control configuration. While some of these transitions are intrinsically reversible and symmetric discontinuities, others are reversible and asymmetric or irreversible discontinuities. State-of-the-art languages incorporate powerful mechanisms to declare any type of transitions (for example, if-then-else and case constructs) which can be nested to an arbitrary depth. A second class of discontinuities arises from external actions imposed by the surroundings on the system at a particular point in time, typically discrete manipulations and disturbances such as operating procedure or imposed failures. The ability to incorporate complex sets of discontinuities describing a series of states in the formulation of a DAE system leads to the concept of state-task networks (STNs) [1]. Many, though not all, modern custom-modeling tools are capable of solving complex problems involving arbitrarily complex combinations of DAE and STN systems.

This question is closed to new answers